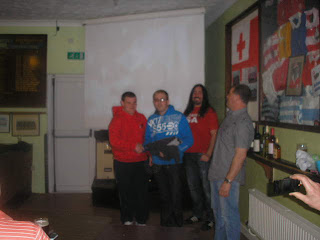 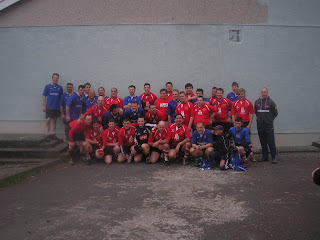 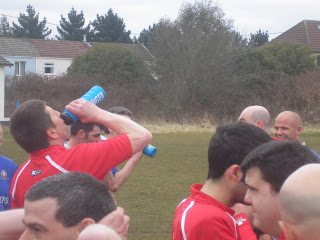 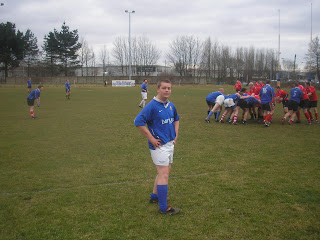 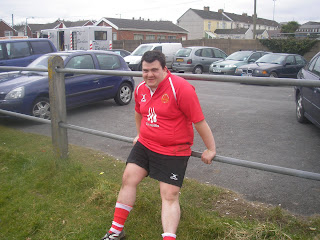 
One of the best matches the Warriors have been involved in with plenty of end to end rugby, so before any further details here's the match report:

MATCH REPORT
The Llanelli Warriors managed to triumph in this hugely exciting encounter at New Dock Stars, just seeing off the challenge of the Carmarthenshire County Council XV with the final move of the game.
The match was set up to raise funds in the name of former Council employee Phil ‘Oggy’ Holding who passed away just over a year ago and as a sports fan He would surely have enjoyed the rugby on display. The game was end to end throughout with some quality interaction as both sides looked to move the ball.
The County side suffered an early blow when scrum half Neil Haddock limped off just before the 1st scrum and the Warriors capitalised as their opponents took a while to settle.
The Warriors mixed up their, attacks nicely with number 1 to 12 bludgeoning away and the utside backs providing the rapier. Curtis Ramcke on the wing constantly made huge ground and his run broke the deadlock when he made a try for Captain Simon Jenkins. Jamie Evans scored one himself and made another for Jon Kerr and a 4th try was scored, when again Ramcke made a break and nice interaction with flanker Gwilym Lewis saw Alex Kwan split the defence and race in for a try.
The Council team also attacked every time they could with Gilasbey sparking many moves. As the Council side settled with Darren King and Mike Jones to the fore they came more into the game and a try just before half time gave them a boost going into the interval even though they trailed 24-7.
The 2nd half was a more even affair with both sides sustaining long attacks. John Horwood set a new Warriors’ appearance record of 150 matches when he came on and helped shore up the set piece but the early momentum was with the Council. Warriors’ full back Delaney was kept busy with Council back rowers Edwards and Thomas initiating a lot of line breaks and rewards came when Will Brown strode over for a neat try. This was quickly followed by a scorching long range effort form Rob Hughes to really put the game back in the balance. Simon Jenkins got an important score for the Warriors after some good work from Messaggiero but the Council confirmed their come back when John Lewis drove over for a score. It was the Wales scenario of would there be enough time for the Carmarthenshire team to snatch it but with Talcon and Pollitt tackling hard the Warriors held firm and eventually got back up field, Pollitt went down just short but Luke Rees managed to wrestle his way over and make the game safe for the Warriors.
Both players and spectators enjoyed what had been an enthralling end to end contest and to cap an excellent day £180 was raised for the Oggy Trust Fund.
Llanelli Warriors: Alex Kwan, Curtis Ramcke (Nathan Lawson), Jamie Evans (Luke Rees), Alun Stephens, Joshua Crowther (Darren Pollitt), Andrew John, Chris Edmunds (Dean Gilasbey), Simon Delaney (Jason Bennett), Jason Jenkins, Richard Evans (Colin Talcon, Huw Jenkins), Jon Kerr (John Horwood), Mike Mineeme, Will Brown (Luke Messaggerio), Simon Jenkins (Cpt), Gwilym Lewis
Carmarthenshire County Council XV: Gareth Curtis, Darren King, Kevin Marks, Mike Jones, Terry, Neil Haddock, Wayne Jones, Kevin, John Owens, John Lewis, Dai, Mark Thomas, Mark Cotterl, Carl Edwards. Subs (all played) Dean Gilasbey, Huw Jenkins, Darren Pollitt, Rob Hughes, Nathan Lawson, Richard Evans, Chris Edmunds, Emyr Morgan, Allen Davies, Lez Rees

With it being a local game (New Dock Stars) there were plenty of Warriors available (where were you all for Cardiff!) even with the usual bibbers (Parker, Lee the Mole and Lee BaaBaa) just watching. Lucky as the Council needed a couple of players.
Neil Haddock's much hyped rugby debut lasted from kick off to 1st scrum (20 seconds) leaving the way clear for Deano Gilasbey to try and talk the arse of the Warriors team. A very enjoyable game both to play in and watch, the Warriors extra pace on the right wing paid dividens as Kwan, J Evans, Killer and Tarw all scored there in the 1st half. The second half with young pups Kwan and Ramcke having to rest hamstrings (whatever they are) was a more even affair notable for William Brown scroing his 1st try. Tackle of the day was certainly Simon Delaney's effort on Mark Thomas whilst nathan Lawson almost got skill of the day with an audatious chip n chase. No suprises that Killer won baby of the day with another strop/pwdi.

John Horwood made his 150th apperance for the Warriors as he continues to push the club record ever upwards. Some class lineout takes and even a bit of rucking proved he is still an assesst to the team.

After the match it was inside to a rammed New Dock to watch Wales 'play'. Followed by a very longgggg raffle with prizes ranging from lovley bottle of whiskey to a tin of red kidney beans. Thanks to Sue and Pauline for the raffle work. The £180 raised will go the the Phil 'Oggy' Trust fund who have previously donated to the Warriors and Help for Heroes.
Posted by Llanelli Warriors match blog at 3:07 am