The rematch was held later in the 1995-96 season at the Llanelli Wanderers ground at Stradey Park. Apparently a one sided encounter that saw the Warriors win easily although the exact score isn't kown. The photos below were taken by the McVicars whose son Edward appears in them at the front of the Warriors lineout. 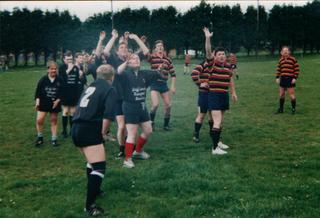 (above) Chris Bonar (far left) comes around as the ball is thrown in. 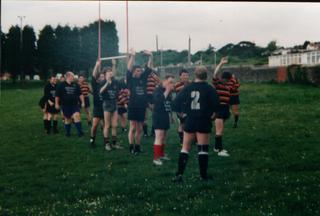 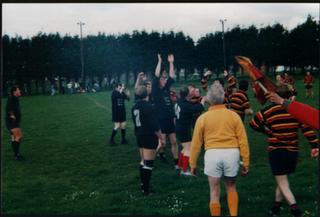 Roger Bowen stands at scrum half, poised ready to spring into action (!) 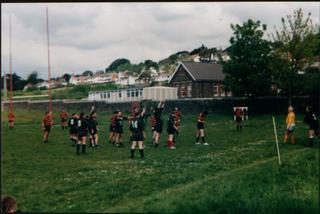 Niel Edwards (14) waits for Wyn Rees to throw into this attacking line. 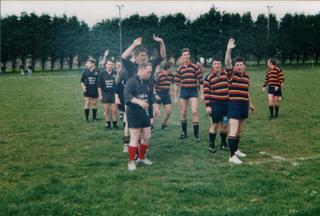 The Warriors 1st match was played at Gorseinon RFC in atrocious conditions. So bad in fact that Warriors wing Gabby McMullan wore a coat for part of the game, brought on by his Mam.The match itself saw the Swansea side make the early running. Depending on which version you hear, either Llanelli then started to gel or Swansea eased off. Whatever the truth of the matter, Llanelli were able to catch their opponents total but couldn’t win the game. Prop Nigel Evans freely admits that his half match appearance was spent trying to catch his manager Andrew Murray while many of the Llanelli team have never been seen on a rugby field since.The game was actually billed as the Swansea Barbarians against the West Wales Warriors and the Warriors appeared in Burry Port kit. Gary James had arranged to borrow the club’s 2nd team kit but ‘accidentally’ kicked up the brand new one which had just been dropped off.After the match Conway Williams caused panic by disappearing without telling anyone whilst Gabby enjoyed having a ‘pint on the head’ (literally). Whatever, the team were up and running.Warriors team: Conway Williams prop, Nigel Evans prop, Wyn Rees hooker, Andy Edwards prop, Darren Hall 2nd row, John Horwood 2nd row, Raymond Millet 6, Chris Williams 7, Robert Williams 7, Neil Evans 8, Wayne James 9, Roger Bowen 10, Gabby McMullan wing, Mark Bryant center, Gary James center, Neil Edwards wing, Andrew Murray full back, Details are not surprisingly sketchy and anyone who has ANY information to add please e mail the site.
Posted by Llanelli Warriors match blog at 7:52 am 1 comment: