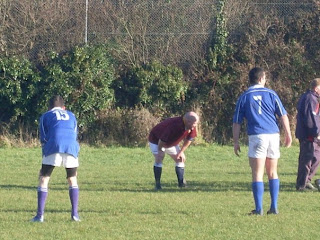 New Dock on the attack but it's ok, Block is there
(to date the only photo from this fixture thats came to light)

A cracking day at New Dock in lovely winter sunshine and some silverware - The Dai Spriggs Cup.

Nice to see a few returning players, ensuring a good squad on the day despite family commitments effecting the team. 1 foto so far so if anyone has any - please send them in via the web site (you have to join 1st mind ;) )

Warriors’ ride luck to secure cup.
The Llanelli Warriors managed to defend the Dai Spriggs Cup in an exciting Boxing Day clash against New Dock Stars. The teams shared 8 tries and it took a couple of kicks and the bounce of the ball to settle the game.
It was a typical Christmas game with a relaxed atmosphere and a willingness on both sides to attack and run with the ball. Christmas commitments also affected the line up of both teams with some unusual selections and rare appearances. For the Warriors Jamie Evans made a second appearance whilst flanker Lee Barber was pressed into duty at centre. Both sides introduced new scrum halfs and both made try scoring debuts with honours even in an intriguing duel.
In fact it was young Jason Baxter who scored the try of the games for New Dock. Backs and forwards combined well to out flank the Warriors defence and several phases of quick ball and good inter passing saw Baxter outshine his Father with a final flourish to cross out wide. It was at last proof that New Dock could do what they had been threatening all game. Throughout the match they put together some sweeping moves only for a last ditch tackle or a careless pass thwarting them. Mark Davies and Gareth Lee did score for the home team but it should have been so much more. Much of the credit should go to the Warriors back three with Randal again having a good match and was well supported by Liam Carpenter and Joshua Crowther who worked hard on the wings. Up front Darren Pollitt put in a lot of work which was rewarded with the Man of the Match award and generally the pack went well, rucking affectively and chasing hard. The Warriors 1st half points came through a Simon Jenkins try which he converted himself, a fine break away from scrum half Cornel and a Jon Kerr penalty.
The introduction of Lee Williams, veteran warhorse Gary James and prop Richard Evans helped the Warriors up the momentum in the second half while Lee Diane picked up his game. Jon Kerr got a Captains effort when he powered over but with Dock still able to attack from deep the game was evenly poised. Defences tightened up but Dock Captain Nima Samari matched Kerr’s effort to bring the scores level, another missed kick meant they couldn’t get ahead.
The Warriors had already ridden their lick pretty hard to restrict Dock to 4 tries but got a late present when super sub Neil Parker harassed the home team into a series of mistakes that saw the ball bobble over the line and the replacement wing plummeted to claim what turned out to be the winning score.
So the Warriors managed to claim the match and the Dai Spriggs Cup. There’s no doubt that Dai himself would have approved of the performances and spirit of occasion although he would certainly have backed himself to do a better job of the kicking. It game was a fitting way to remember the full back and a fine addition to Llanelli’s sporting calendar.