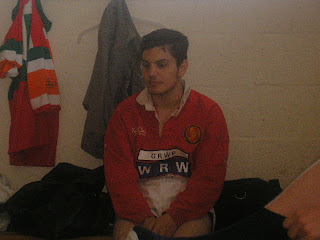 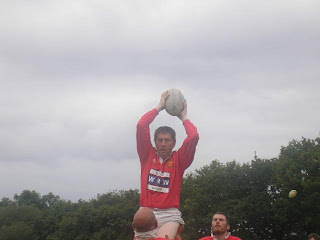 Jumpin' John jumps in warm up 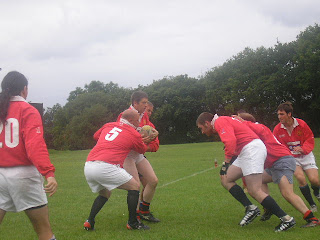 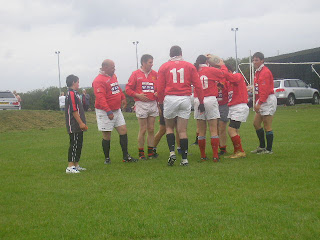 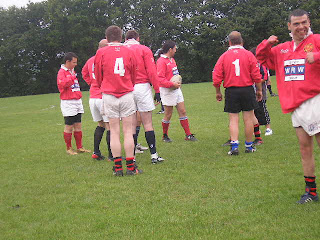 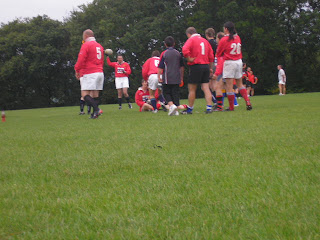 Tony: I've got the ball so I'll go Captain 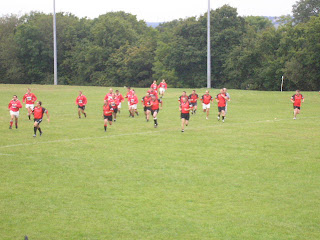 On with the game at last 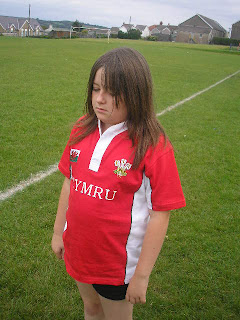 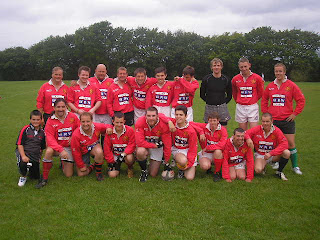 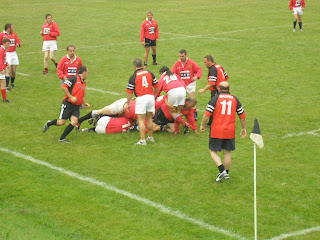 Warriors on the attack 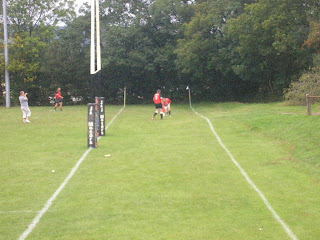 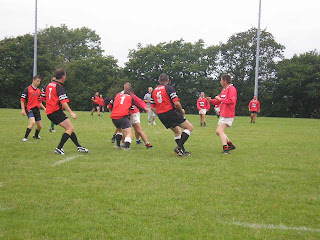 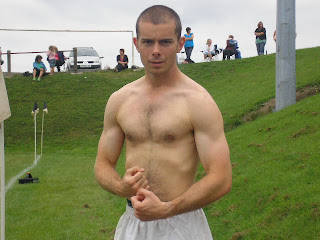 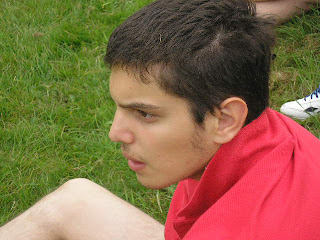 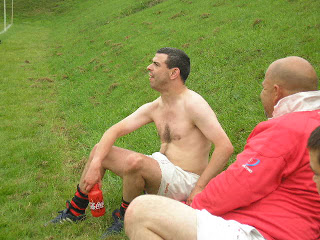 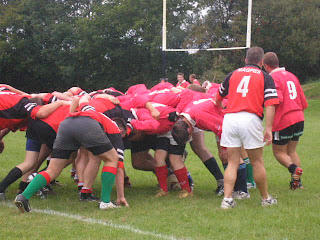 Reds with the ball 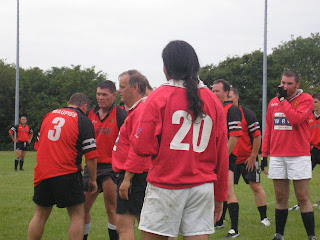 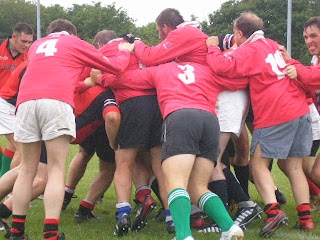 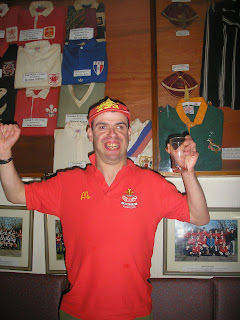 Colin and his cheesy grin 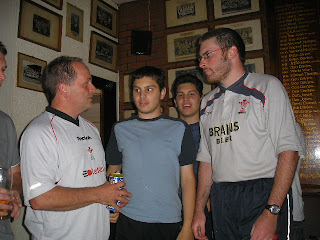 As Captain Tony accepts a can of Fosters 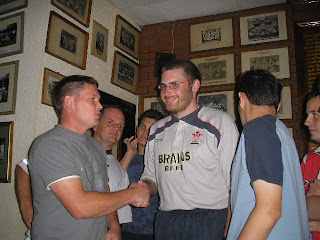 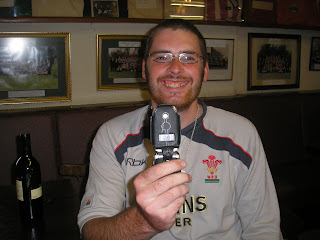 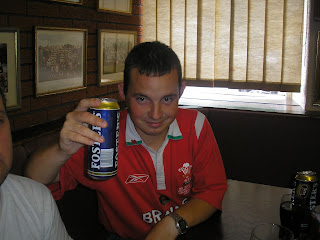 Rich bach - head smaller than a can of beer 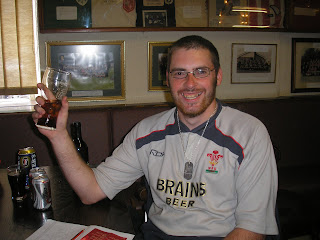 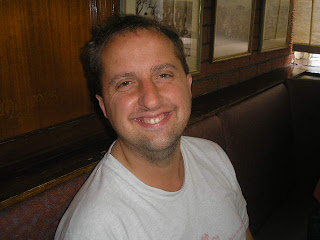 Meredith Pugh does a Talcon impression 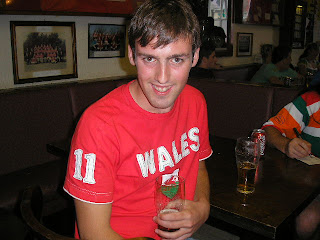 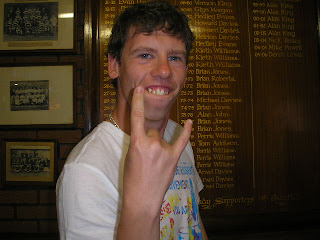 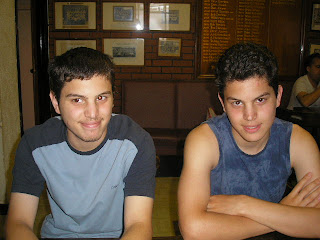 This weeks spot the difference: Carpenters 1&2 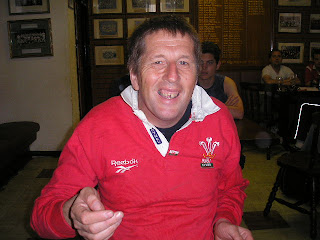 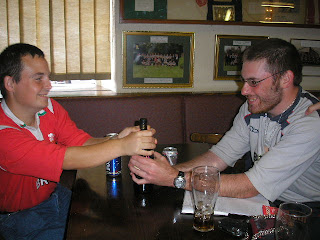 Rich & Tony discuss who won the raffle
Match number two of the season on the day Wales played Canada in the World Cup. Much better organised than last season although the teams did have to wait for Tumble U16s to play Baglan.
The game was (as last year) well natured, fast and entertaining. Both sdies enjoyed and once wales got their act together it was a happy Tumble Clubhouse.
Tony Whittaker was voted Capatin ahead of quality nominations Meredith Pugh and Jonathan Kerr. He did a fine job, playing well and encouraing those around him.
Debutants Liam, David and Rhidian all did well and with a number of regulars missing certainly took their chance. It all bodes well for the visit of the Gladiators next Sunday.
Thanks as ever to all at Tumble, especially the ladies who made food and John Smart who organised the raffle raising £50 for the Warriors cause.

Match Report
The Warriors maintained their good start to the season by edging out Tumble in the exciting but good natured encounter. Tony Whittaker took over the Captaincy and did well personally and in inspiring those around him. Both sides looked to attack from the off and it was a while before the Warriors broke the deadlock through Jon Jones following several phases.
Early season nerves and unfamiliarity plauged both sides at crucial times but the players contiuned to be adventurous with long passages of play keeping the good crowd entertained.
Tumble's ambition soon paid off and Rhydian Rowe sped away for an equalising score.
The game contiuned end to end as two even matched teams looked for an advantage. Emyr Davies led from the front for Tumble with an energetic performance whilst Huw daniels used his considerable experience to direct attacks. For the Warriors Richard Evans and Stuart Taylor were impressive and Liam Carpenter had a great debut on the wing.
Tumble got the next score in game that was obviously going to be tight with Richard Davies finishing off some fine interplay.
The Warriors soon hit back though when Andrew John snatched a trade mark interception. Both sides continued to have chances and it was Tumble who went into the half ahead as Derek Lloyd got their 3rd try.
Despite the humid conditions there was no discernable drop in the tempo as the teams went into the 2nd half. David Carpenter continued his brothers good work whilst Meredith Pugh was eventually named man of the match for a typically gutsy performance. They got an equalising score through Jon Kerr after a break from Rhydian Jones and Whittaker slotted the crucial conversion. Jon Jones got his second to put the Warriors further ahead with kerr this time adding the extras but the game was far from over.
Tumble redoubled their efforts and pounded the Warriors line for the final quater of the match with last ditch tackles and slight mistakes keeping them at bay. It was a nervy ending for the Warriors but they clung on for a victory that now sees them unbeateb for a club record 13 games and in good stead for the Gladiators visit to Stradey park next week.
WARRIORS: Mathew Jones (Neil Parker), Liam Carpenter (David Carpenter), Andrew John, Stuart Taylor, Darren Pocot, Jon Jones, Dean Gilasbey, Colin Talcon, James Dew, Meredith Pugh (Richard Evans), John Horwood, Tony Whittaker, Jon Kerr, Jason Bennet, Gwilym Lewis
STOP PRESS:
'You haven't mentioned my try you twat - you've given Juice 2'
- Mathew 'I don't mind, it's for the boys' Billo
Scorers:
Tries; Jon Jones, Andrew John, Jon Kerr, MATHEW JONES.
Conversions: Tony Whittaker, Jon Kerr.
Man of the Match: Meredith Pugh
Debutants: Liam Carpenter, David Carpenter, Rhydian Jones
Posted by Llanelli Warriors match blog at 1:09 pm No comments: