Match report
The Warriors wound up their season with an impressive victory against the Cambrian XV at Stradey Park. After their traditional slow start to the season the Warriors took off and this match took their unbeaten run to 10 matches.
The bright weather helped their cause no end and were soon showing the sort of style which has brought them success this season.
Phil Williams marked an overdue return to the side with a very early try which gave the side confidence and allowed them to relax. Both sides looked to move the ball around whenever possible and an enthralling match with plenty of skill on show soon developed.
Any ideas that the Warriors had that this would be a stroll in the park were quickly dispelled by the Cambrian pack. With Jason Bennett and Wayne Jones leading from the front row, the back row of Mat Kirkham, Stu Jones and Dominic Reynolds were a dominate force throughout the match. The Warriors were lucky to go further ahead through Richard Pegler (improved by Jon Kerr) and both sides worked hard to find any openings.
The Cambrian hit back through Ryan Williams after some fine inter-handling stretched the Warriors defence. Two quick-fire tries from Richard Pegler though put the Warriors clear again as the half time whistle approached. James Dew also went close in a purple patch for the home team but the likes of Craig Edwards and John Kerr kept the Cambrian positive and the Warriors were flattered by their half time score.
The start of the second half saw the Cambrian step up their efforts with scrum half Wayne Phillips bagging a try and conversion. The Warriors were thankful that a number of players stepped up to the mark with Meredith Pugh, Richard Evans, Jon Kerr, Simon Jenkins and Man of the Match Tony Whittaker putting into practise what they had learned over the season. Both teams were able to bring in quality players from the bench, Warriors Mathew Jones and David Edwards equalling out the contributions of Chris Davies and Luke Pawello. The other Cambrian sub Laurence Reynolds though, got them a crucial score.
The match back in the balance the Warriors had to dig deep if they were to maintain their record and they did so. Jon Jones got one try and then Richard Pegler finished off a sweeping move to equal the club record with his 4th touch down. Simon Jenkins slotted his third conversion to complete the scoring and the season for the Warriors on a very high note.
Jason Jenkins led his team off the field with one of the most impressive seasons to date for the club who continue to prove that having a learning difficulty is no barriers to playing rugby.

A good match with all those mentioned deserving their name checks (on the Warriors side anyway). Tony had a busy game at full back but it was a shame he couldn't have landed a kick to go with his attack and defence performances. Rich Pegler looked slightly bewildered when subbed shortly after his 4th try but he had already claimed a share of the club record. fair play to the Cambrian who had to put up with not one but 3 crap refferees (Chrisp/Funky/Duw Duw) but at least they didn't have to put up with the sunlounger based mocking of Lee The Mole.

After this it was back to the Cam' for the presentation night which you will be able to read about HERE
Posted by Llanelli Warriors match blog at 3:24 pm 2 comments: 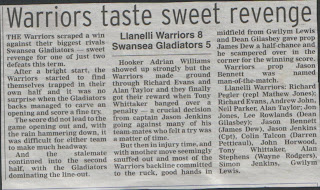 Match report
The Warriors managed to scrape a win against their biggest rivals and oldest opponents, the Swansea Gladiators. It was sweet revenge for one of just two loses they have suffered this term but took them a lot of hard work to secure.
This was the 19th game between the two teams and as closely fought as any of them. The teams were very evenly matched and the awful weather was even more of a leveller. Consequently much of the game was played between the two 22s and both sides found it hard to gain any momentum.
With two tough defences and lots of handling errors both sides got frustrated. After a bright start the Warriors started to find themselves trapped in their own half and it was no surprise when the Gladiators backs managed to carve an opening and score a fine try.
The score didn’t lead to the game opening out and with the rain hammering down it was difficult for either team to make much headway.
The stalemate lasted into the second half, the Gladiators dominated the lineout with dynamic hooker Adrian Williams showing up strongly but the Warriors made ground through the likes of Richard Evans and Alan Taylor.
The Warriors laid siege to the Gladiators line and finally got some reward for their efforts when Tony Whittaker banged over a penalty, a crucial decision from Captain Jason Jenkins going against many of his team mates who felt a try was a matter of time.
It looked like he might have been mistaken as the minutes started to slip away and it must have been into injury time before the Warriors breakthrough came. With another move seemingly snuffed out and most of the Warriors backline committed to the ruck, good hands in midfield from Lewis and Gilasbey gave prop James Dew a half chance. A twinkle toed side step allowed him room to move and he scampered over in the corner for what proved to be the winning score.
With a number of injuries having occurred there was still time for the Gladiators to go for the win but the Warriors held firm to ensure the victory.
Both teams had put everything into a tight contest and Warriors prop Jason Bennett was later named man of the match.
Llanelli Warriors: Richard Pegler (Mathew Jones), Richard Evans, Andrew John, Neil Parker, Alan Taylor, Jon Jones, Lee Rowlands (Dean Gilasbey), Jason Bennett (James Dew), Jason Jenkins (Cpt), Colin Talcon (Darren Petticaul), John Horwood, Tony Whittaker, Alan Stephens (Wayne Rodgers), Simon Jenkins, Gwilym Lewis
Warriors scores:
Try: James Dew
Penalty: Tony Whittaker

Man of the Match: Jason Benett
Posted by Llanelli Warriors match blog at 2:41 am 1 comment:

Match Report
The Llanelli Warriors managed to maintain their unbeaten run but only by the skin of their teeth in this exciting encounter at Stradey Park.
The Market team’s training sessions had obviously paid off and they all but snatched the glory. Off decent ball, the quick running of Mark Davies was an obvious asset from early in the game and he got them underway with the 1st score.
The Warriors though didn’t panic. Most of their systems were working well, they were having plenty of the game and making good ground. Flanker Alan Stephens got them back on level terms with a typical strong run. The game itself settled very much into this pattern, the Warriors tending to have the edge in territory and possession, but the Market living up to their nick name ‘The (T)Raiders’ capable of long range attacks. Both teams crossed the line twice again before half time. Davies completed a hatrick for the Market while Stephens got the Warriors second and Andrew John sneaked over in the corner. A conversion apiece from Adrian Davies and Jon Kerr made it all square at half time.
The second half was a tighter contest with a ferocious forward battle. It was no place for the faint hearted but the likes of Colin Talcon, Roger Thomas (Warriors), Roy Jones and Rob Stephens (Market) thrived.
In such a tight contest every score was critical so Richard Pegler carving through for the Warriors put them in the driving seat.
The Market put plenty of pressure on the Warriors line but Richard Evans led a stubborn defence. It looked like the Warriors would hold on but after several thwarted attempts Mark Evans again got over for the crucial score. The conversion proved a little too much and so honours were shared, a fair result after an excellent game.
The Warriors certainly benefited most though, to the tune of £1,500 raised by the Market team through donations and sponsorship.
Warriors: Lee Rowlands (Richard Pegler), Richard Evans, Neil Parker, Andrew John, Tony Whittaker (Meredith Pugh), Jon Jones, Dean Gilasbey, Colin Talcon (Darren Pettipaul), Jason Jenkins (Cpt), Jason Bennett, John Horwood, Roger Thomas, Jon Kerr, Alun Stephens, Simon Jenkins, Chris Spriggs (Gwilym Lewis)

No ref and no spare kit for the Market and no women’s curtain raiser, but once it got going it was a cracking game.
The Market team certainly had prepared well and looked as though it was chosen from people who shopped there rather than people who worked there, so many were the numbers. A Warriors investigation is also set to try to find out at which stall the Davies brothers (Whitalnd RFC) work.
The game was a good contest and the review is (for once) pretty accurate. The Warriors kickers were unlucky not to get more kicks over as all 4 conversions went close from difficult angles. Mind the Market had one bounce off the crossbar whilst the Warriors had one bounce over.
After the match it was the odd surroundings of the Tennis Club, couches, broken toilets and slow beer taps n all. A good crowd stayed to enjoy the feast of food the Market had provided and try to win a prize in the longest raffle this side of Cefneithin. Despite prizes for all, (Rich Pegler winning a free burger), Tracey was caught trying to claim a prize under false pretences.
Jason gave a classic speech, Rich got a Man of the Match trophy almost as big as himself and the Warriors got £1,500.After that a kind of relay pub crawl began as the Market team followed the Warriors following the New Dock contingent from the Tennis club to Furnace, The Colliers and the Kilkenny Cat. There was even a few survivors holding up the Bar Luna so Big Al could have a little sleep (or two) and Billo could put in an appearance. Tracey apparently won the last home award, but mainly because she had to be carried.

Posted by Llanelli Warriors match blog at 1:24 am 1 comment: