The review appeared in the Star a week after JCB had been buying up all the copies. (These long - side of a page reviews are blydi difficult to scan mind) 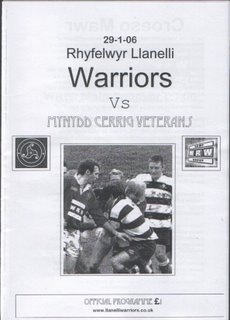 A very enjoyable return to Pontyberem (does it ever thaw) and an excellent win. Nice to see a big crowd turn out with programmes all sold within minutes. Probaly should have scored more points but James Fotos committed the biggest cock up in Warriors history ever (well since Paul Picton 'forgot' to put the ball down in Llangennech anyway), dropping the ball over the line after Warriors early dominance finally looked to have paid off. the blunder where Juice, tarw, tony and someones else all left the ball only for Cerrig to dive in for a try was also worth a mention and of course Billo and Juice running into each other as part of another intricet backs move (Just lucky it wasn't Big Al or Juice wouldn't have got up). Never mine, all went well in the end and Roger even has a trophy to show for it afterwards (a tray with apples on). Top after match singing from Jason as well and it was probaly for that that he got named man of the match afterwards.
Match report:

The Warriors started 2006 were they left off in 2005: Pontyberem, but they managed to improve on the previous visits draw, just, with this hard earnt slender win.
The Mynydd Cerrig team contained a good blend of youth and experience but the Warriors had the advantage of a fairly settled side with most of their big players in place. The hard ground and sunshine made for near perfect conditions and an exciting game was expected with a large crowd present.
The Warriors totally dominated the vast majority of the 1st half with James Davies and Meredith Pugh working hard on the wings. The Cerrig side had their backs to the wall but with the likes of Aled Jones and Gareth Davies to the fore frustrated attack after attack. They threatened to break out on occasion and it was obvious that the Warriors needed to turn pressure into points. It looked as though they had done when Davies rounded the cover to cruise behind the posts but he inexplicably dropped the ball just as the referee was about to blow for a try. He was immediately hauled off and replaced by Tony Whittaker who continued Davies’ earlier good work. With time running out in the 1st half another substitution paid immediate dividends, coach Gwilym Lewis coming on and rounding off a move with his first touch of the ball.
At half time the Warriors looked to be in control of the game and there was no panic as they started the second half. It soon proved to be a much closer affair. With the ball now pinging about the field both sides looked capable of several scores but Jonathan Jones managed to get the Warriors further in front when he crossed after some scrappy play in the corner.
Mynydd Cerrig though, were bound to get some reward as they continued to press their cause. Adrian and Stephen Boyces combined well and Emyr Davies was worked through a gap for a score which Stewart Mathews converted. Back came the Warriors and although the Cerrig line held firm they conceded a penalty which Simon Jenkins duly converted. The crowd were treated to an exciting match then as both sides plugged away. The emphasis was on running and handling rather than brute force and there was plenty of skill to admire. Mark Lloyd and Tony Rees went well for Cerrig whilst Andrew John and Gareth Walters looking threatening for the Warriors. Cerrig continued to improve throughout the match and only desperate defence kept them at bay. Tensions mounted when Kirk Mathews scored for Cerrig but with the conversion wide the Warriors were still a point in front. Under the astute captaincy of Roger Thomas the Warriors attempted to run down the last seven minutes on the clock. It seemed as they would do so until a speculative kick rolled over the try line. All four Warriors hesitated and watched in dismay as Stewart Davies managed to stretch a hand onto the ball.
The Warriors had barley two minutes in which to rescue the game but they set at their task. Thomas didn’t panic under pressure and got his team up field and within scoring range. After a couple of snatched attempts it was second row Jon ‘Killer’ Kerr who pulled them back from the brink. Finding himself in a bit of space his stepped of his foot and hared through the defence for the try of the day. Although his conversion hit the upright the Warriors had triumphed as impressive referee Jonathan Hardy blew for time.
The Warriors had plenty of plus points to take from this match as they prepare for Saturday’s ‘international’ against the Saracens Brave Herts at Stradey (kick off 1pm)

no photos this time as 3 sets of batteries had run out and Billos phone was being repaired. The review has probaly got the Cerrig scorers in the wrong order and I have been asked to mention Emyr Davies falling flat on his arse when he went to take a conversion.

Posted by Llanelli Warriors match blog at 2:08 pm No comments: