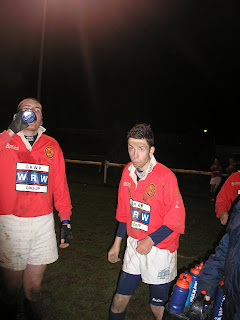 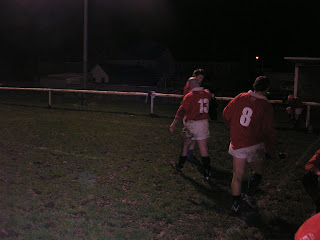 forced into the corner 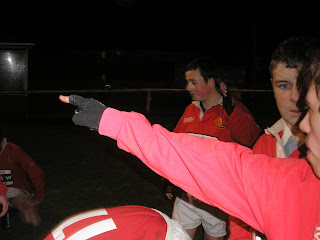 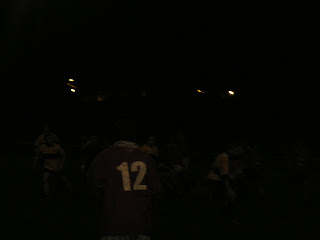 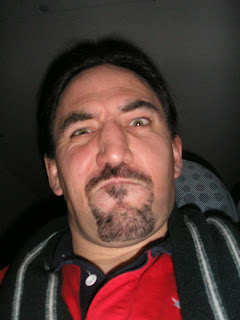 His Mother loves him 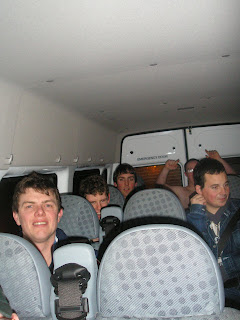 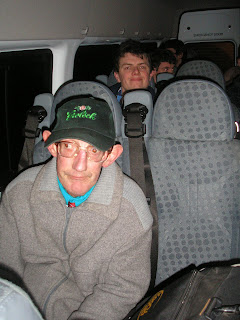 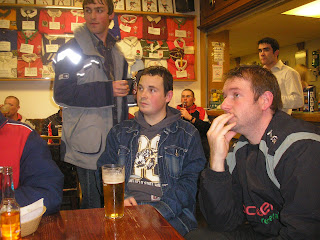 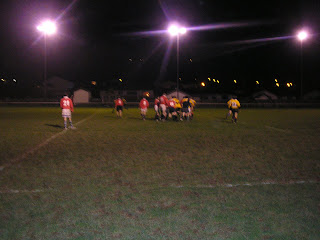 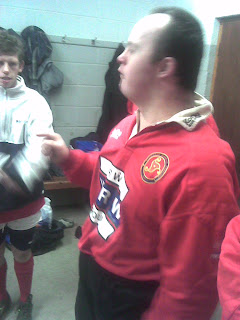 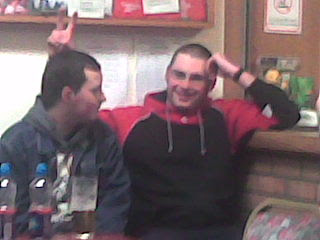 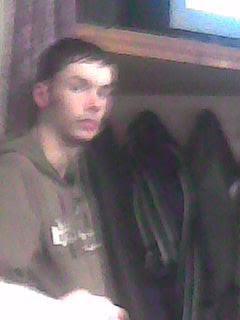 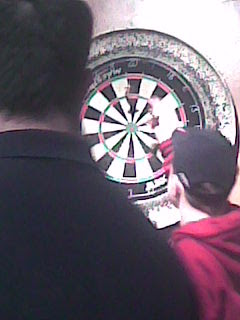 Good darts Jas - so you can throw straight then? 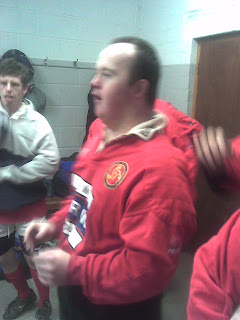 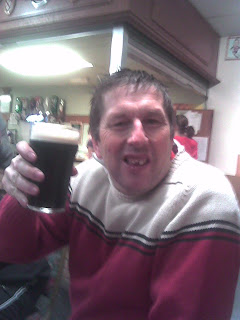 Jumpin' John Horwood toasts another win
Nice to finally get a fixture in this year, and despite missing several players, nice to get a win. Perhaps the Betws team weren't too worried about the result but there were some good performances from the Warriors: Simon had some of his best moments on a rugby field with some great tackles and strong runs, Josh and Darren did well on the wings and Billo showed the Betws team he can play rugby after all.
Afterwards Jason 2 Guns was the top performer trying to convince Sally they were getting married and showing off his singing skills.

Darren Petticot was the hero for the Llanelli Warriors when they won this exciting encounter at Betws. His two tries was the difference between the sides and capped a fine performance.
With both clubs rekown for their running rugby it was no surprise to witness a quick match and the score could have been much higher, especially if Betws had taken several chances.
The Warriors featured two new players in Joshua and Nathan David, whilst the Betws XV saw a rare run out for club legend and former Captain Jonathan ‘Bullet’ Hughes.
Joshua in particular had a fine game in both attack and defence, impressing so much he was later named man of match.
The game itself was a pacy contest. The Warriors hadn’t played for a month whilst Betws fielded a mixture of first and second team players and so there were plenty of mistakes and not a lot of structure. Steve O’Neil’s excellent referring meant the game had plenty of flow and there was some fine skills involved from both sides. For Betws Richie Griffiths was at his mecurial best as he set of attack after attack whilst for the Warriors there was the contrast of Mathew Jones’ elusive running and Simon Jenkins directness. Up front Jason Jenkins led a confrontational front row effort.
Both sides scramble defence held for the first half and although Betws seemed to have the upper hand the Warriors looked constantly dangerous on the break. Eventually prop Alan Taylor provided the break through, following several short drives he managed to dummy his way over despite an excellent tackle from Nathan Davies.
Simon Jenkins managed the angled conversion and it was enough to keep the Warriors ahead when Nathan Jones struck back for Betws, rounding off a fine move but the conversion slipped wide.
The game continued to hang in the balance right until the final quarter. Gareth Underwood almost broke through for Betws and Cellan Davies also went close but the Warriors managed to hang on in. And so the stage was set for Pticots brace, first he finished off a nice handling movement and then, in the final minuted he set off on a weaving run that started near the half way and finished under the posts, giving Joshus an easy conversion, and the Warriors the glory.
As Betws 2nd team Captain, Warriors Player/Coach Gwilym Lewis (who himself had a fine game) was pleased for both teams at the final whistle.
“Its always a good game here in Betws, it’s part of a busy 6 nations which will climax with the visit of French side Ledre in a few weeks but today it just went the Warriors way. We are playing really well at the moment and the boys are putting what they do in training onto the pitch.”

How can you lose with team talks like this?


Swansea Uni fixture last week didn't quite happen but there is a full report (with pics) on the Photo blog.
Posted by Llanelli Warriors match blog at 12:13 pm No comments: 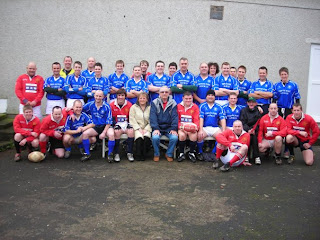 Teams line up with Dai's parents 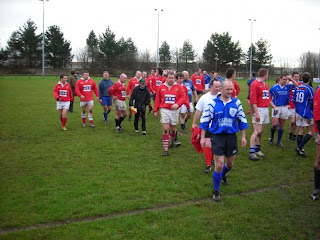 The game was too fast for photographers 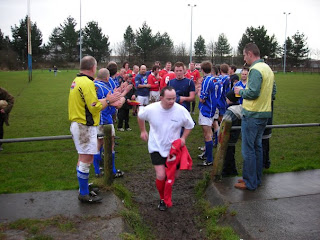 Jason 2 guns on another impressive run 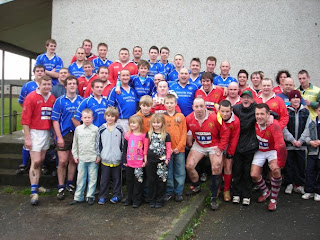 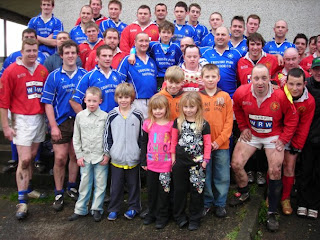 Don't get too close! 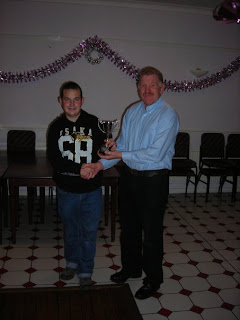 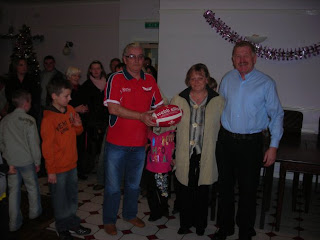 A hectic but very enjoyable day at New Dock Stars (again). Played on boxing day as a memorial to Warriors/Dock Legend Dai Spriggs it is hoped it will become an annual event.
The match was another exciting affair with the score swinging back and fore. Eventually following a great team movment, John Horwood crossed at the death to produce a match winning try and continue the Warriors unbeaten run.
With a number of players missing Richard 'Hapus' Evans stood in as Captain of a rather experimental team with Tom Corcoran amongst those making their debut for the club. His cousin Gareth, playing just his 2nd match got two tries whilst the 'vocal' Simon 'Tarw' Jenkins was named Man of the Match.
Try of the game was that scored by Jonny 'Killer' Kerr who scored from 50m, skinning the opposition full back whilst Jason Jenkins had some good runs against his brother Gareth Curtis.
WARRIORS TEAM & SCORERS: 15. Tom Corcoran 14. Rich Evans capt 13. Neil Parker 12. Gareth Corcoran 2 tries = 10pts 11. Jon Kerr 1 try =5pts 10. Jon Jones 9. Scott 8. Simon Jenkins 1try and con = 7pts 7. Chris Spriggs 1try = 5pts 6. Lee Barber 5. Stu Taylor 4. Jon Horwood 1try = 5pts 3. Jason Bennett 2. Jason Jenkins 1. Alan Stephens