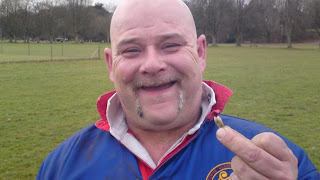 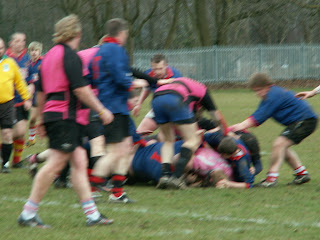 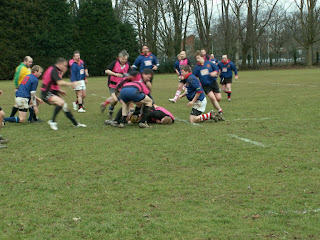 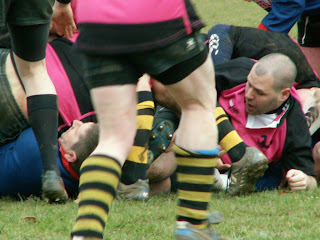 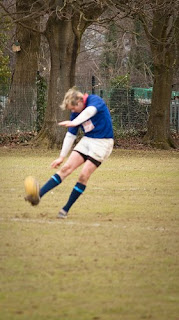 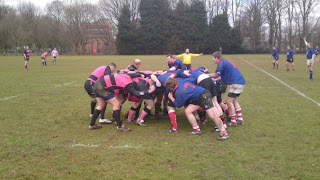 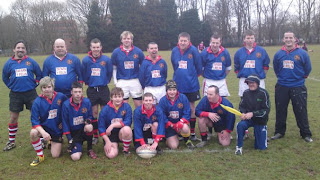 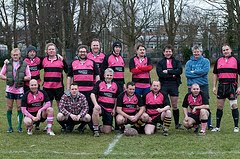 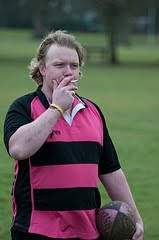 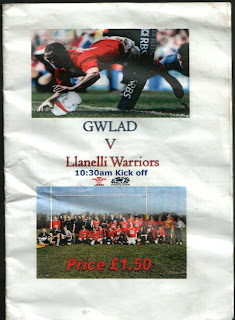 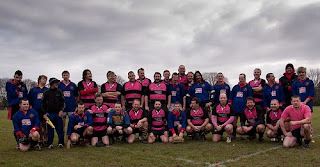 A difficult time to start the whole; whose playing, whose paid, where's thingy, what time we back, wheres the bus picking us up from, etc
Warriorettes were out in force with Tracey Shambles, Sharon, Sue Pegs, Tori Pegs & Carol Bach being joined by Kirsty, Lauren and Gemma - the latter two not wearing enough clothes to cover Dai Newson's Belly. They along with various wimps/injured players/committee: Lewi, Nusiance, Lee Mole, Dean Chappers, Parker, Killer - meant we almost had more supporters than players (in fact when we met Michelle up in cardiff it was a 50/50 split)

Once the driver had finally been directed to the fields (think we might have actually left the city limits again at one point) we met up with the Bloc n Juice shuttle.
The chilly morning meant a good warm up was nessacary and once some very colourful team photos had been taken it was on with the game. the match report pretty much says it all really:
Funds were raised, beer was drunk, dances were danced, fun was had - but brfore all that rugby was played, here is the report...

The Warriors travelled to Cardiff to play Gwladrugby.com. The top Welsh rugby forum, staged the game as a fundraiser for Marie Currie Cancer Research but were especially pleased to take the Warriors unbeaten record in the process.
The Warriors suffered a number of late withdrawals but after a good warm up they looked ready for business. The 1st half was a fairly brutal affair as the packs battled for supremacy. Captain Darren Pollitt led the Warriors with enthusiasm but it was Gwlad who got the edge and ground down their opponents. The Warriors rucking was again found wanting and they suffered a number of turnovers at the breakdown.
Dominating possession they camped in the Warriors half and the score seemed inevitable. Fittingly it was their outstanding play and ex schools cap Harris who made the breakthrough, the scrum half powering over from close range.
The dominance continued for most of the half and it was only desperate tackling with the Warriors back row of Lawson, Hughes and Lewis outstanding, that thwarted several attacks. This kept the Warriors in the game as Gwlad scored just once more before the break.
The 2nd half was a more open affair which consequently suited the Warriors backs. Despite often having poor ball they always looked dangerous. Fly half Jon Jones pulled the strings and centres Pegler and Jones consistently made inroads.
Although Gwlad scored next Pegler scored a long range effort to put the game back in the balance.
With Oliver prominent, two more Gwlad tries ended Warriors’ resistance as the game’s pace continued to be fast and furious. Quarterly and Thomond enjoyed their contest up front, Robbins scored with a trade mark burst whilst Donnelly not only scored a jinking solo effort but also slotted the only Gwlad conversion. The Warriors relied on the tackling of Ramcke and Talcon to stem the tide and the team got just reward when Jones streaked away for a try in the corner as the clock expired.
Despite the result it was a great experience for the Warriors to travel to Cardiff and help raise funds for such a worthy cause.

Llanelli Warriors: Curtis Ramcke, Joshua Crowther, Mathew Jones, Richard Pegler (Rob Eirwg*), Richard Evans, Jonathan Jones, Wayne Evans, Jason Bennett, Jason Jenkins, Colin Talcon, John Horwood, Darren Pollitt (Cpt), Nathan Lawson, Robert Hughes, Gwilym Lewis
Gwlad: Mike Thomas (Rob Eirwg*), Leon Clunk (Padraig O'Gazelle), Chris BTR Humphreys, Rory Jones, Kevin Robbins, JPR Morgan, Neil Harris, Chris Ofprop, Steve Postie, Dafydd Oliver (Gethin Pearson), Kelvin Dill (Stuart Beard), Osian Bigman, Tim Thomond, Nick Mate, Sean Quaterly (Cpt)
Warriors tries: Richard Pegler, Mathew Jones
Gwlad scorers: Neil Harris, Kevin Robbins, Donnelly (tries) Donnelly (conversion)
Warriors Man of the Match: Rob Hughes
* not 'Dai' as the press might have you beleive.
The Warriors defensive effort was pretty outstanding and really Gwlad should have scored some more points, there was even a Dean's moment of controversy when Robbins claimed he had been pulled back after scoring. Having said that, in Billo, Pegs and Ramcke the Warriors probaly had the most dangerous runners on the pitch.
The days Lewi strop then occured after the game when he thought he had lost his coat but it was soon over to the Halfway (via a sarnie with Gwlad and an oyster with XV De Lerdre) to join the more scantily clad supporters (who hardly lasted 5 minutes on the side of the field despite their 'blanky') for the 1st of the days beers.

A 'quick' trek accross town ('Come on Lewi, Come on Colin') to city hall (very very posh) and some more beers, food, complaints about paying for food, more beer and then one of the worst Welsh performances and one of the greatest Welsh wins in recent memory.

Despite Boycezone and Cor Meibion Dyffryn Aman it was far to libary like for the Warriors so it was on to the Phillamonic where Sharon led the dancing (and falling) in front of the big screen while the rest of the pub tried to watch France smash Ireland. Inevitably the Warriors took over the dance floor but the stripping was too much and when Wayne wasn't quick enough to get his clothes back on out went the Warriors.

Never mind on to the next bar - Sue limping along after her fall - where Lewi had to vouch that Neil parker wasn't as drunk as he looked for him to be allowed in. Then it was back to the bus, via the Welsh team bus, finally got that lookalikie ffoto of Killer and Jonathan thomas, hassled Stevo and watched Lee get caught in the bus door whilst he shouted at Jamie Roberts. Billo then tried to jump on the 2nd team bus where Robin McBryde was hurling abuse at the Warriors because he thought it MUST be going to Tumble - how close we were to the Warriors joining Andy Powell on a drunken golf buggy drive to the services we will never know!!!

Finally we got to our own bus for a sing song and a sleep before droppng everyone saftley home in Llanelli. Time for committee hard lads Gwil & Lee to catch a quick one before food. Despite almost crying when he left a sarnie in the city hall Lee also left his kebab untouched and spent most of the night/morning being ill.