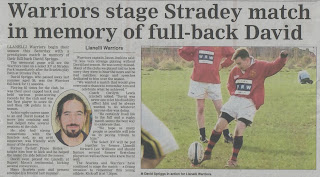 Preview of match from Llanelli Star
The llanelli Warriors managed a narrow victory in this prestigious fixture.
Played alongside the Scarlets v Bath match a good crowd stayed to watch the Warriors as they managed a rare opening fixture success.
The Llanelli Warriors triumphed in this memorable fixture against a Select XV put together by former llanelli player Lee Williams in memory of thier former full back Dai Spriggs who passed away last summer.
The Select XV, appropriatley featured Dai's 'other' club New Dock Stars strongly and also featured players from Pontyberem, Cambrian, Mynydd y Garreg and the Warriors whilst the Warriors welcomed back legendary No8 Dai Newson, out of retirment for this special occasion.
It was the Select XV who started strongest though. They gelled faster than the Warriors and got two ealry tries through Andrew Dock and Jamie Seven. Martin Smith gave them solidity in the center and Phil Williams provided hard yards up front.
The pace of the game affected the Warriors with Richard Evans and Colin Talcon feeling the pace but James Howelles and debutant Pontins did well in their place. Veteran John Horwood ensured the Warriors had decent ball to work off from line outs and center Neil Parker got them points on the board with a well taken try.
The match remained close throughout. Prop Justin Lloyd and Ioan Roberts showed their skills for the select XV who scored again through diminutive center Speedicut and Gary Wing. The Warriors were indebted to thier kickers. Whittaker slotted one excellent conversion whilst Simon jenkins bagged two but was left to rue a missed opportunity for a try when instead of trusting to his power he tried to chip the last line of defence and failed. The Warriors scored a popular try when Chris Bonar drove over from a line out whilst Jon Kerr scored a spectacular effort at the start of the second half, snatching the kick out and beating his father for pace to the line.
The Select XV lost some momentum when Paul Herbert was replaced by Matthew Jones. Jones may have wished he hadn't bothered as he was closley marked and took big hits from Roberts, Rowlands and Parker for his troubles.
James Dew kept up his remarkable try scoring record for the Warriors to put them into a healthy lead but the game entered a frantic final stage when , after several spurned chances, Adams finally scored for the Select. The missed conversion left the Warriors hanging on to a 2 point lead and so hectic were the last few minutes that it sometimes appeared to be 20 a side. The Select pushed for the winning score but it wasn't to come and so the Warriors had managed a rare winning start to the season.
The game, played in a friendly yet very competetive manner was a fitting tribute to David Spriggs who no doubt would have relished the fact that the Warriors needed accurate kicking to ensure their victory. The Warriors would like to thank all those who helped them remeber their former team mate. the players and officials who turned out and the Scarlets for their support and finally Dai's family whose seal of approval made everybodys' efforts worthwhile.
Llanelli Warriors: Colin Talcon (James Howelles/Chris Bonar), Jason Jenkins, Pontins (Jason Bennett/James Dew), John Horwood, Jonathan Kerr, Jon Bonar (Mike Esney), Dai Newson (Chris Spriggs), Simon Jenkins, Dean Gilasbey, Jonathan Jones, Richard Evans (Richard Pegler), Wayne Rogers (Gareth Davies), Neil Parker, Tony Whittaker (Darren Petticoat/Meredith Pugh), Matthew Jones (Rob Roberts/Lee Rowlands)
Select XV:Justin Lloyd, Simon, Ange, Phil Williams, Tim, Paul Herbert, Lee Williams, Jamie, Adam, Ioan Rob, Daryl Walters, Speedy, Martin Smith, Gary, John Kerr, Iwan, Mathew Jones.
The above report is thanks to Lee Mole and therfore all complaints should be made in person to him. Good to see such a good turn out for this important fixture as not only did it pay tribute to dai but also bodes well for the coming season. This was the Warriors 12th fixture without defeat, equalling the previous record. Rowlands highlighted many aspects of the game; His big tackle on Billo, Sheep's big tackle on Billo, his big tackle on Billo, Parker's big tackle on Billo and of course his big tackle on Billo. Simon will be held to account, not only for trying to chip John Kerr with the line at his mercy but also arranging half the team to 'cover back' whilst the other half were left to get on with it up front - open side flanker my arse!
Nice to see Duw Duw get another try, but even nicer if he learnt to pass abd finally spare a thought for John Kerr who as you read this is no doubt having his son re live, in glorious technicolour detail, how he was skinned for a crucial try.
Posted by Llanelli Warriors match blog at 6:08 am No comments: