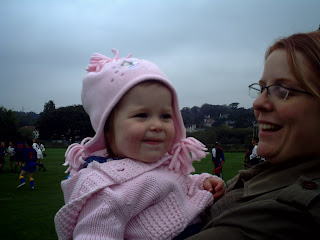 Evie Rowlands shows her Fathers understanding of the game 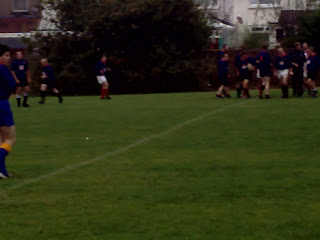 The game was a blur 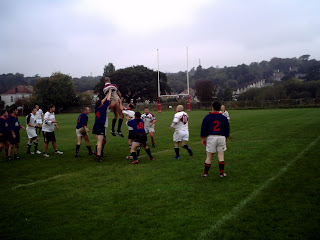 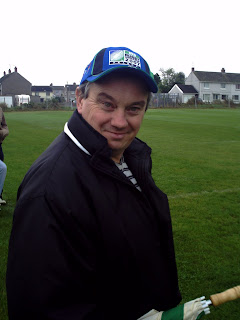 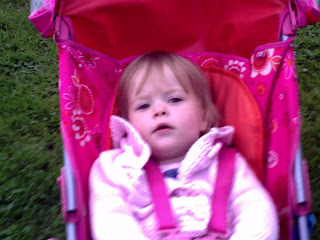 Bring your own stand 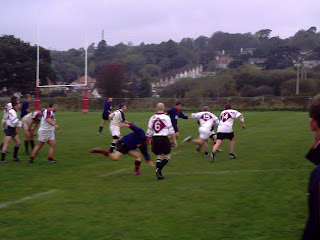 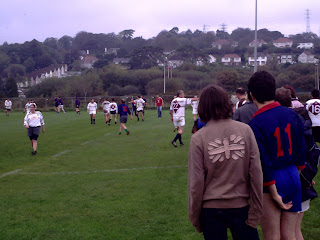 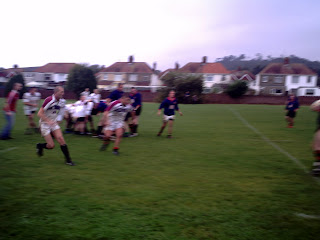 too fast for fotos 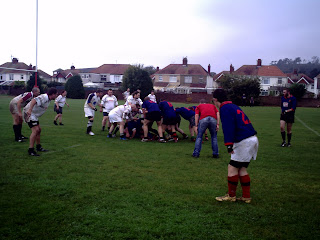 Warriors ball from the scrum 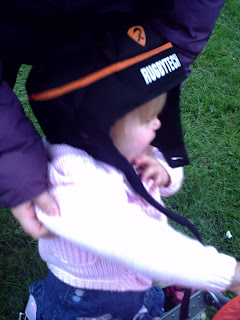 The main rugby player in the Rowlands household 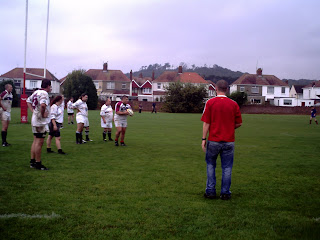 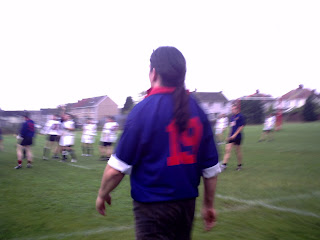 "just cos I've got hair like Chabal, I don't want to sub!" 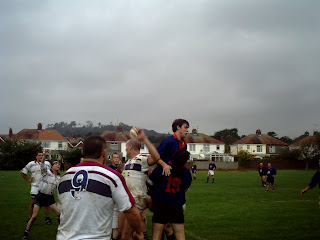 Rugby players soaring into the air at a line out... 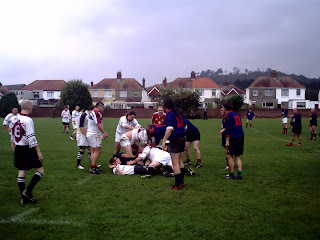 ...and dynamically powering over rucks 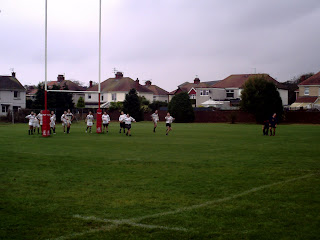 Killer kicks the final points of the match

Match report
The Llanelli Warriors continued their impressive start to the season and have now extended their unbeaten run from last season to 14 matches. The latest triumph was perhaps one of the sweetest as they claimed the Dai Spriggs Memorial Shield from their old rivals the Swansea Gladiators.
As ever it was a close match between two evenly matched teams. Both sides defended bravely and it was obvious from the early stages that opportunities would need to be taken.
The Gladiators produced much of the early pressure but with the likes of dai Edwards and Richard Evans tackling anything that moved, the Warriors line held firm.
Although their forays into the opposition 22 were rarer the warriors made the most of it when Dean Gilasbey crossed following good approach work from Simon Jenkins. Captain Tony Whittaker smartly banged over the conversion for a 7-0 lead that lasted into the second half.
The Gladiators hit back with a sweeping move up the right flank, for once the Warriors tackling was fund wanting but fortunately the wide angle proved too difficult for the conversion.
New blood such as Martin Smith and the Carpenter twins Liam and David had a positive effect on the Warriors performance but it was another old stager, Alan Stephens, to power over and extend the Warriors lead.
Again this was somewhat against the run of play and the Gladiators, dominating the line outs and aided by Warrior indiscipline, soon pushed back up field. Pushing for the score that might have brought them level it was a nervous time for the Warriors. However, when it seemed the Gladiators pressure was likely to pay off scrum half Gilasbey again found a gap and somehow managed to avoid tacklers as he scampered the length of the field. Jon Kerr hammered in the final nail with the conversion which made the game safe.
Both sides should be proud of their performances in this exciting game which kept the crowd entertained with plenty of skill and commitment shown throughout.
Llanelli Warriors: Alan Taylor, David Carpenter (Liam Carpenter), Neil Parker, Alan Stephens, Richard Evans (Darren Petticot), Stuart Taylor, Dean Gilasbey, David Edwards (Meredith Pugh), Jason Jenkins, James Dew (Martin Smith), John Horwood (Roger Thomas), Tony Whittaker (Cpt), Jon Kerr, Simon Jenkins, Chris Spriggs (Gwilym Lewis)
Tries: Dean Gilasbey (2), Alan Stephens
Conversions: Tony Whittaker, Jon Kerr
14 matches unbeaten, thank goodness Deano managed to get back from Swansea! (even if James Dew wanted his try to be described as 'fell over from a yard'). A couple more useful debuts and another fine performance from the Carpenter twins. Also seen getting stuck in were Dai Ed, Rich Hapus, Jumpin' John and Crisp. If only 'too late' Tony would follow their example we might have nilled the opposition.
To be fair the game was played in a good spirit on the field and the Warriors did well to win. It was lucky everyone got on as the after match stuff in the Cambrian certainly saw everyone going toe to toe in the bar although the only contest was to try and get some food.
Thanks to Josie for the photos.
Posted by Llanelli Warriors match blog at 10:21 am No comments: