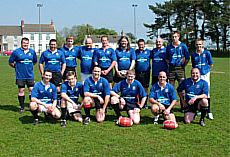 The Warriors began a busy end of season running with a well constructed victory over Owens Transport in Llangennech last Sunday.
As ever the dry conditions suited the Warriors running style and they played sunshine rugby at a quick pace despite the heat.
Owens suffered an early blow when ex West Wales fly half Andrew Davies hurt his foot in the act of kicking off. Whilst they re arranged the Warriors got up and running. Jon Kerr made early pressure count by slotting a penalty and Andrew John snatched a trade mark interception.
In fact whilst Owens were settling the Warriors threatened almost every time they had the ball. Some poor options coupled with strong defence from Owens with Craig Basset prominent frustrated the Warriors for a long period. Twinkle toed Neil Parker danced over for another score towards the end of the half before the Owens team hit back.
Andrew Roberts caused plenty of problems for the Warriors from fly half and brought his back line into the game. They scored two excellent tries through center Paul Evans and impressive second row Jordan Jones one of which scrum half Rob Tires converted.
Despite the scorching heat the second half saw both sides just as determined to run the ball, a credit to fitness levels all round. The main difference seemed to be that the Warriors took their chances and managed to frustrate the Owens team who weren’t helped when Armin was sin binned for a trip). Whilst Gwilym Lewis scored one and made another for Jon Jones, scrum half Dean Gilasbey and No8 Alan Stephens crossed in the corner all supplemented by some excellent kicking from Kerr and Tony Whittaker, the key to the victory was defence. The real heroes on the Warriors side were the likes of Roger Thomas, James Howells and Richard Evans who put everything into holding up their opponents. The Owens pack went close with some strong driving from Jason Bennett, Merion Davies and Gareth Twig while the wings Davies and Owen looked dangerous and should have scored one excellent try only to go over the dead ball line.
The game was enjoyable for all involved, thanks to a good atmosphere and excellent refereeing. The Warriors will hope to build on this when they take on a team from Llanelli Market next Sunday: kick off 1pm.
Warriors XV: Lee Rowlands, Tony Whittaker, Neil Parker, Andrew John, James Howells, Jon Jones, Dean Gilasbey, James Dew, Jason Jenkins (Cpt), Richard Evans (Colin Talcon), John Horwood, Roger Thomas, Jon Kerr, Alan Stephens, Gwilym Lewis.
Owens XV: Adam Davies, Simon Davies (Lee Pop), Paul Evans, Craig Basset, Emyr Owen, Andrew Davies (Andrew Roberts), Rob Tyres, Jason Bennett (Cpt), Mark Pontin (Steve Cuttler), Merion Davies, Jordan Jones, Gareth Twig (Paul Jones), Alex Lewis, Keith Davies, Ralph Armin.

The hardest pitch the warriors have ever played on = FACT!
The above scoreline is a bit subject to argument partly due to the fact that, because of the badly marked pitch (f**tball & rugby markings on the odd bit of pitch there was any grass) several people thought they had scored when they hadn't. Blistering hot heat helped the crowd enjoy but not really the players but it was certainly a fun game. Apparently Owens suffered record absentisim the next day which was put down to the tough conditions on the pitch and not the poor conditions of the players.

Check out the mention on the Owens site: Cliliwch

Posted by Llanelli Warriors match blog at 3:58 pm No comments: