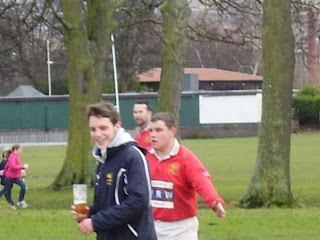 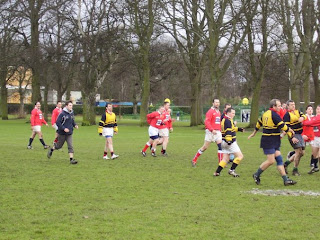 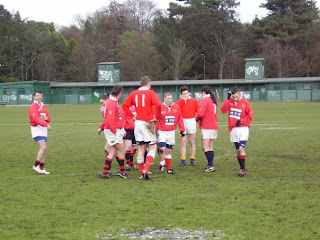 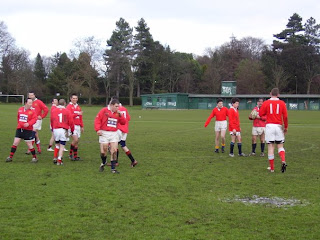 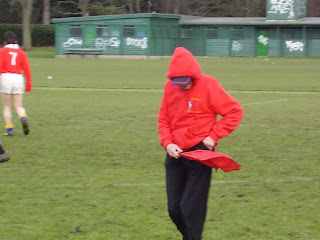 The Llanelli Warriors enjoyed a successful trip to Scotland recently, following the fortunes of the national team and playing their own match in Edinburgh.
The team who include players with learning difficulties took a 20 strong party north of the border including 5 young men who had never been on such an expedition before. These included tour Captain Joshua Crowther.
The icy conditions meant that the Warriors scheduled fixture against Edinburgh Northern was initially cancelled but the enthusiasm of the team meant that a game of touch rugby was held. Despite being generally unfamiliar with the format the team responded to the challenge and conditions well. They secured a 15 all draw with tries from Gwilym Lewis (2) and David Carpenter. Simon Jenkins was named Man of the Match. Once the after match presentations were out of the way, the clubhouse which was packed out with supporters from the Warriors, Betws and other local clubs treated their hosts to a tradition Welsh singsong. So enjoyable was the afternoon that the clubhouse was drunk close to dry with takings said to have sent up the club for the rest of the season.
On the Sunday the Warriors had a chance to have a look around the historic city before watching Wales claim an impressive victory over Scotland.
Tour Captain Crowther said “It’s all been a great experience; we’ve made loads of new friends and taken the concept of integrated rugby back up to Scotland.” Another first time tourist, Darren Pollitt said “I never thought I would have the chance to do something like this but it has been a fantastic trip”
Club secretary Gwilym Lewis said, “This is what the Warriors and rugby are all about. The boys were fantastic in representing their club and their town. It’s given them a lot of confidence to come up here and play rugby, well away from any comfort zones. I’m not sure any of us will be quite the same again.”
The Warriors will be looking forward to their next match – the 10th anniversary of their fixtures with Cefneithin on March 24th.

It seems a bit daft to have a proper match report for a game of touch rugby but seeing as we are going to count it as a match (well we didn't loose so...) here are some general recollections.
On turning up the Warriors were told in pretty uncertain terms that there would be no game – not even touch as the ground was solid under a small layers of sludge. The Warriors (used to playing touch on concrete) immediately set their tactics to work. Those with the longest faces and most doleful looking (Simon & Rich) were sent out to the pitch inspection whilst Neil and Gwilym (using passed experience) started drinking. These tactics soon paid dividends with the Northern Gents team announcing we would have some sort of game and hurriedly phoning a team.
With the home team a bit short of numbers the Warriors lent a number of players with Richard Evans, John Horwood, Huw Jenkins and Colin Talcon all adding Edinburgh Northern to their rugby cv’s.
Once the game was under way the Warriors did pretty well despite their unfamiliarity with this version of the game.
Initially it was the more experienced players who made up the running; Gwilym playing scrum half feeding Dean Chapman, Big Alun Stephens, Lee Rowlands, Simon and Neil Parker. With the whole team working hard in defence the game was scoreless for the 1st quarter. Eventually Big Al and Gwilym worked their way up the flank and when the pint handed ref failed to call a possible forward pass Gwilym was able to open the scoring.
As the team got used to the game (fast) and the conditions (cold) so it settled down. Edinburgh scored a couple of tries but with the Warriors by now sharing the ball carrying duties they held their own. Eventually David Carpenter got a neat try for the visitors.
The second half saw the Warriors disrupted somewhat. Neil was forced to leave the field after leaving his breakfast on the pitch whilst Lee Rowlands took to playing in the keeper position (the football pitch confused me). What with Gwilym noticeably tiring (much to the delight of a growing crowd of supporters containing a rather hooligan element from Betws RFC) other Warriors stepped up to the mark. Captain Josh Crowther had a busy game whilst the Carpenter twins, Jason 2 Guns, Darren Petticoat and Talcon all did well.
A crucial missed tackle from Gwilym saw the Northern go back in the lead but as the game headed towards a climax he made some amends banging the ball down for a short range try.
The Warriors were pressing again and were also aided when Huw was forced to rejoin the game. Unfortunately just as Warriors legend Chris Bonar got back onto the field the game was disrupted by an idiot, sorry irate football official who didn’t take kindly to the use of his field for (TOUCH) rugby. With time almost up it was decided to abandon the game with the scores standing a 3 tries apiece.

Tries: Gwilym Lewis (2), David Carpenter
Man of the Match: Simon Jenkins
The video shows the match in all its glory (please remeber we were cold... and hungover... and tired... and drunk and...)
Posted by Llanelli Warriors match blog at 1:03 pm No comments: