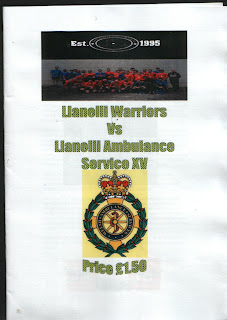 Despite the long season the Llanelli Warriors proved they still had plenty of running in them as they beat Llanelli Ambulance in a high paced encounter at New Dock Stars.

As ever the firm ground helped the Warriors cause although the heat played a big part especially in the latter stages. In the rather cautious early stages both sides looked a bit reluctant to show their hand but the game did slowly come to life. The ambulance edged the early encounters and demonstrated some good skills whilst launching several attacks.

They looked odds on to score when Richard Evans broke clear only to be denied by an excellent Ryan Morgan tackle. The Ambulance side continued to press and eventually took the lead with a well taken try through Jones. The Warriors began to come more into the game after this, Rhydian Williams providing a big presence and Jason Jenkins going well. As in several recent matches the Warriors’ Achilles heel was their rucking with forwards not getting over the ball effectively. The Warriors where helped enormously when Robert Davies was forced to leave the field as he had benefited from their poor rucking the most.

If that was their weakness then their strength was full tilt attack. Quick offloads, fast hands and pace out wide meant that if they did win ball they were inevitably dangerous. Wing Curtis Ramcke again showed he needed only half a chance as he crossed to get the Warriors of the mark and flanker Nathan Lawson ensured they led going into the break with a strong run.

The second half saw the teams start off going try for try, scores for the Warriors through Pollitt and Randall quickly being cancelled out. Randall scored again to re-establish a 10 point lead at 29-19 but as the heat took it’s toll the Warriors finally pulled away. Effective centre Jamie Evans won a long race before replacement centre Neil parker stormed through the middle. Simon Jenkins 3rd conversion saw the Warriors past 40 points but the Ambulance team had the last word. Father and son duo Luke and Cam Messaggiero ran hard throughout whilst scrum half Scipee was often a handful. They saw some reward for their hard work as the Ambulance team crossed at the death for a well deserved consolation score.

Warriors full back Andrew John was later named Man of the Match ahead of several candidates to round off a very enjoyable day of rugby.

MORE hot sunshine. MORE debuts and another win. A good day at New Dock again for the Warriors.

Despite some almost non existent running the Warriors managed to pull off a win here, helped by a strong local turn out and the Ambulance needing a couple of loans. This almost back fired on the Warriors when Rich Hapus broke clear in the 22 but young Ryan Morgan, playing only his 2nd ever game of rugby managed to pull off the cover tackle. More comic moments were to be had, especially in the 2nd half with father and som Message-aeros Cam and Luke back chatting and falling into each other, Cam also geting a Simon special from behind just when he thought he was in the clear. Big Rhyd added to jis 1st cap with his 1st injury (baddy finger) Apart from that he spent half the game going the wrong way and the other half apologising to Gwilym for going the wrong way.

Neil Parker was able to move away from ref and in his 2nd game and with his 1st touch he split the defence for a crucial try. Good to see Gary Shed back as ref - keeping an eye on young nephew Jamie.

There was the disapointing spectacle of Wales v South Africa in New Dock Clubhouse afterwards although some Warriorettes did finally arrive (Hi Haley, Leslie, Carol Bach & Tracey). Thanks to New Dock for (just in time) getting the field ready.